As soon as I met LabVIEW (Laboratory Virtual Instrument Engineering Workbench), I was fascinated to this tool. LabVIEW is a graphical programming language that uses dataflow programming composed by nodes, whose execution is determinate by the flow of data. This allows which tasks are run in parallel. Thus, it’s a practical and flexible way for data analysis and interpretation, besides allowing to create nice interfaces to users. Besides being inserted locally through hardware resources (keyboard, mouse, camera, Data Acquisition device, I/O device etc.), the data can be send from others software that are communicating with LabVIEW and via network devices (Bluetooth, Ethernet, etc.).
Its programmes are calling Virtual instruments (or just VIs), because your operation and appearance imitate physical instruments. They are composed by front panel (a user interface) with controls and indicators and by block diagram where contain the code, which is compiled directly to machine language.
Well, when LabVIEW starts up, a window similar to this appears: 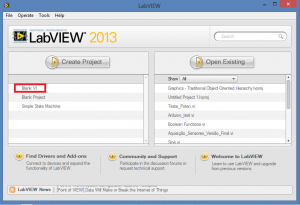 Selecting blank VI you will have access to the desktop and the two windows. The windows of Front Panel and Block diagram will start empty, but to begin to familiarize yourself with the VIs the images below are from a very simple VI. 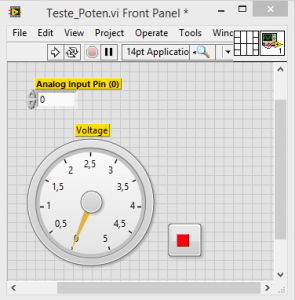 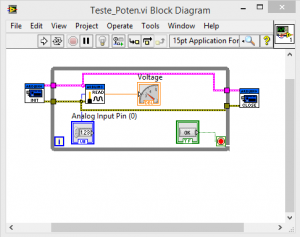 The images of the left and of the right, are the Front Panel and Block diagram, respectively. This simple VI shows the voltage that is reading in some Analog input from Arduino Uno.

If you click using right-hand mouse button an empty space of each of this window, you’ll can see set of particular tools, that are the most used menus. LabVIEW, like C language (and other programming languages) consists of a few basic elements as variables (input, output and auxiliary) and instructions which can be looping (for and while) or decision making (if and case), for example. At the Controls pallet you can selected the controls and the indicators (“variables”), while at the Functions pallet are shown functions, VIs, structures (“instructions”). 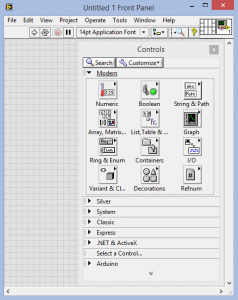 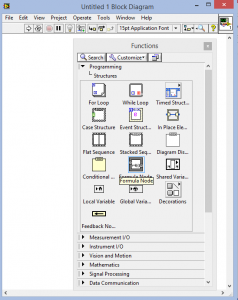 Other useful pallet is the Tools pallet, which is available both on the Front Panel as in Block diagram.

Depending the tool, which you had selected, your mouse cursor will change its mode operation. When the automatic tool selection is activated, LabVIEW automatically selects one of the tools based on your cursor position. The Wiring tool

. Other important detail is devote attention to the appearance. Crossed wires, for example, can make the program difficult to understand.

That are other important buttons from LabVIEW’s toolbar. Specially the “Context Help” button.

means which the VI you are creating or editing contains errors. When the “Context help” is activated, a float window appear showing the information about the icon that you pass the cursor and it is a very important resource because show us the inputs, outputs and what the functions do. 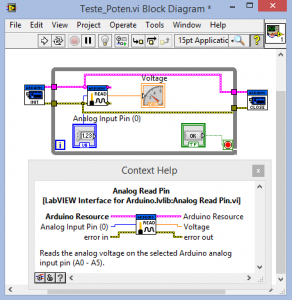 If you want to configure some object, changing its appearance or behavior of front panel and block diagram objects is only right-click the object, this because all LabVIEW objects have associated shortcut menus, also known as context menus, pop-up menus, and right-click menus. 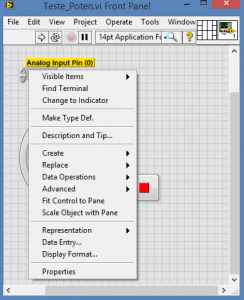 Well, this is not even the tip of the iceberg. We can use LabVIEW for Data acquisition and signal processing, Control instruments, Automation of test and validation systems, Embedded systems monitoring and control and Prototyping. But a downside is your expensive cost. The good news is that we can found the demo version at www.ni.com, which is valid for 45 days. 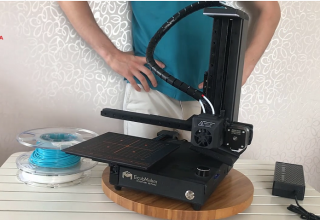 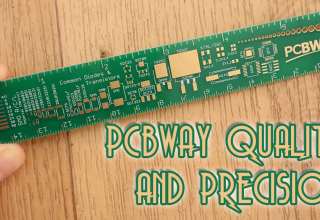 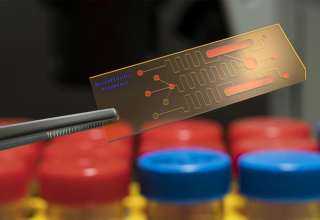 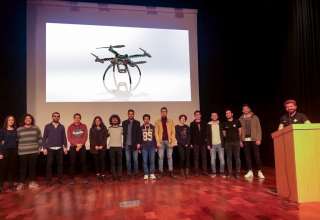 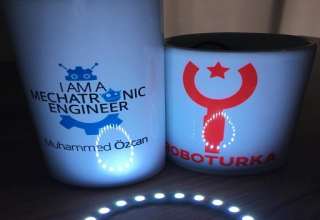 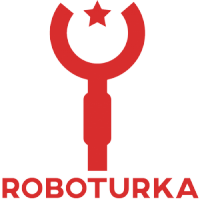